Welcome to our site!

Thanks for visiting. We hope you enjoy your stay! We are a free church like our forefathers before us and all are our brothers and sisters in the Lord.We hope this can be your church to share the love of God

By Greg Dixon
A reader from yesterday’s article about our church, the Indianapolis Baptist Temple, being raided by 100 federal marshals on February 13, 2001 on a Court order from Federal District Judge Sara Evans Barker in violation of the Holy Scriptures and Indiana and federal Constitutions writes the following typical response:
Hello Greg,
I would like to receive The Trumpet. I am so sorry this happened to you and your church. I can hardly believe it happened with almost no reports in the media. I have always said that there is a State Religion in America just as there was in the USSR, and this convinces me even more of that. Thank you very much. Blessings, Don 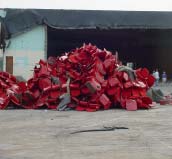